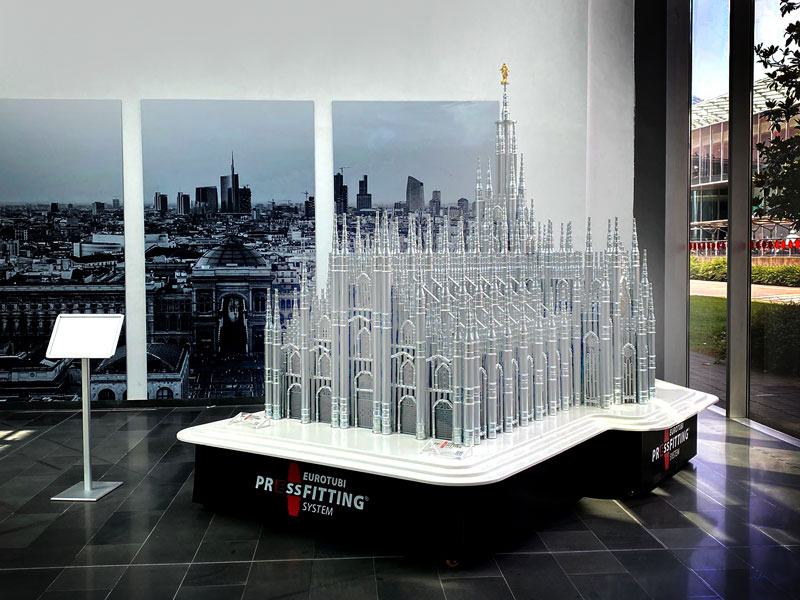 For Eurotubi, the 2022 edition of the MCE Expocomfort Trade Fair was truly special, and not just because it was the first in-person event after the pandemic. Since December 2021, our reproduction of the Duomo of Milan made of pressfittings has been permanently on display at the Milan International Fairground service centre, an extremely prestigious location, after having sought a suitable place for quite some time.

Only those who have had the opportunity to see it in person can understand its true beauty. The accurate reproduction of the Duomo of Milan made with pressfittings was initially one of a number of “works” devised to present our products at trade fairs. The 2018 edition of the MCE trade fair in Milan was different though. The public success of our “Pressfitting Duomo” reached unimaginable heights beyond the walls of the fairgrounds as it was posted on all social media, shown on television, and discussed in national newspapers. What began as a promotional installation became a true “work of art”.

Today we will tell you how the idea came about and will discuss the development of the project along with the setbacks and construction problems and how they were overcome. Then, we will take about the long process to find a permanent home that is worthy of our Duomo.

The idea and the project

Our General Manager Luigi Malgrati entered a shopping centre and saw a reproduction of the Duomo of Milan made entirely of a very famous brand of toy blocks for children. “If they were able to reconstruct the Duomo out of plastic blocks, why don’t we make one with press fittings and pipes?” 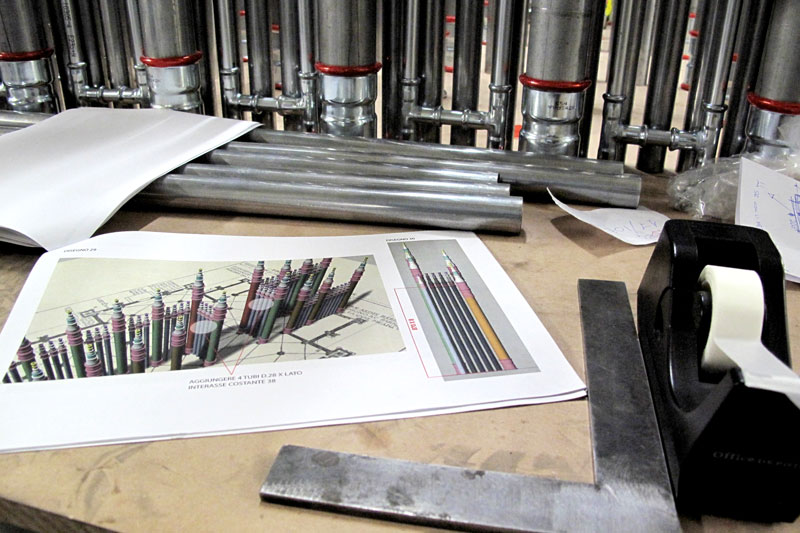 It was the beginning of November 2017 and the plumbing and heating industry trade fair; MCE 2018 would be beginning in mid-March. Would we be able to complete our reproduction of the Duomo by then? 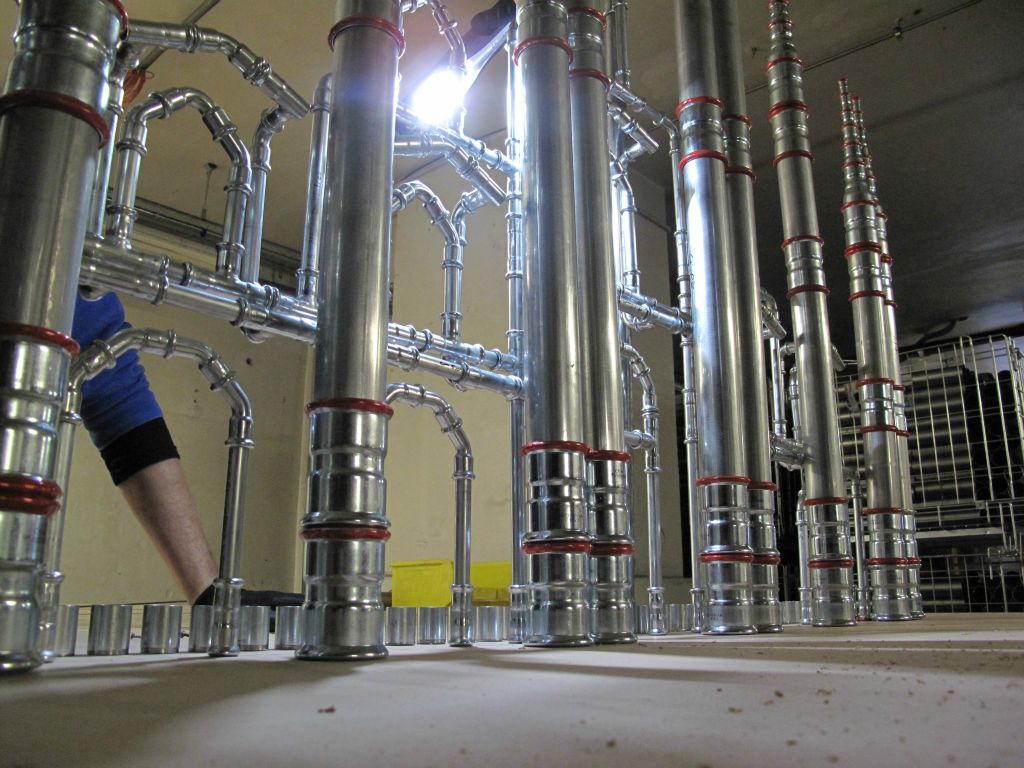 Creating a detailed and accurate reproduction of a complex architectural work like the Duomo of Milan using pressfittings and pipes was the ideal challenge for demonstrating the extreme versatility of this plumbing and heating piping system. 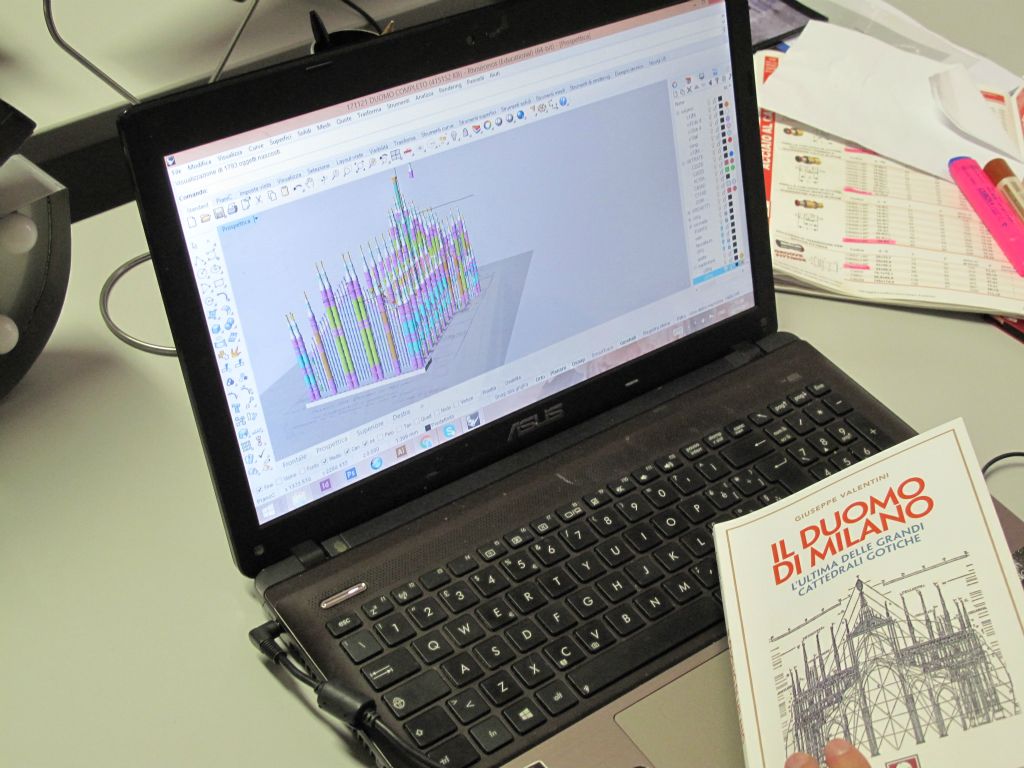 The phases of construction and problems to be resolved

The task of translating our CEO’s ideas into reality was entrusted to our Innovation Department based on the careful CAD design created by our external collaborator and designer, Giulia Calvi.

The primary input was to use our pressfittings as much as possible, except for less easily imitated structures such as the roof, doors, and windows.

Our reproduction of the Duomo of Milan is as faithful to the original as it can possibly be, with even the spires laid out as they are in reality, using reductions and couplings that simulate the real course of the construction. 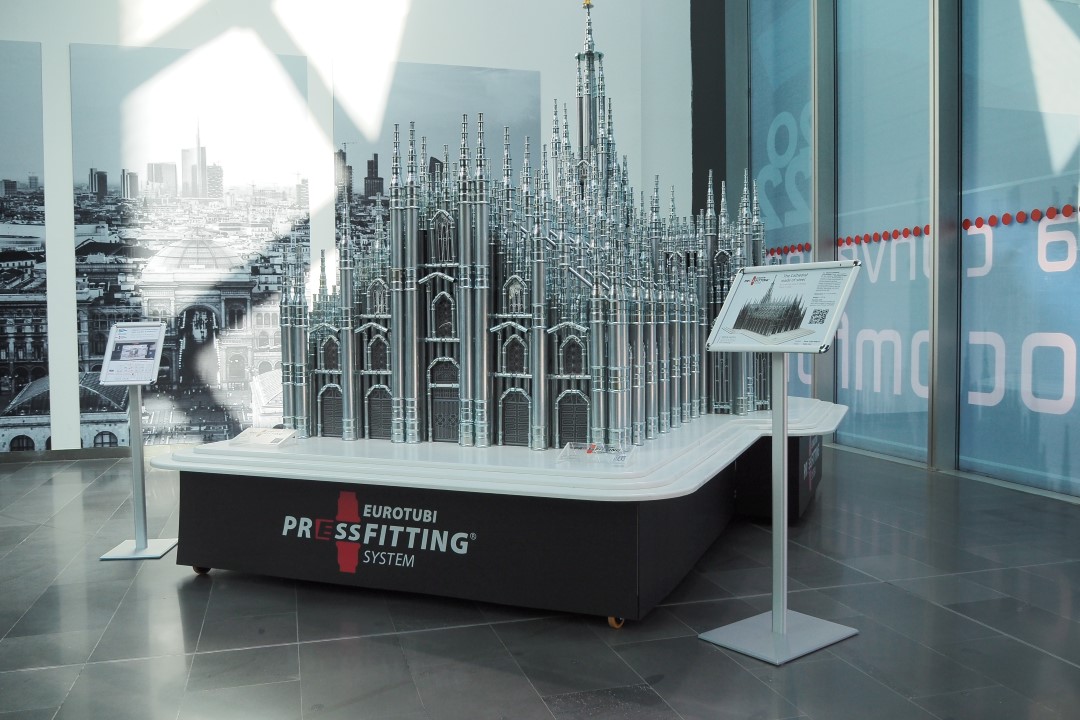 The solutions used for the rest of the structures are the result of numerous experiments aimed at recreating everything in the most accurate and elegant way possible. The result can be admired in the rich details added to the roofs, beams, transepts, and frames of the doors and windows.

The project demanded commitment and effort from all those involved, but the results were also immediately apparent. This structure that had been created to sponsor the pressfitting system had instead become a true Work of Art. 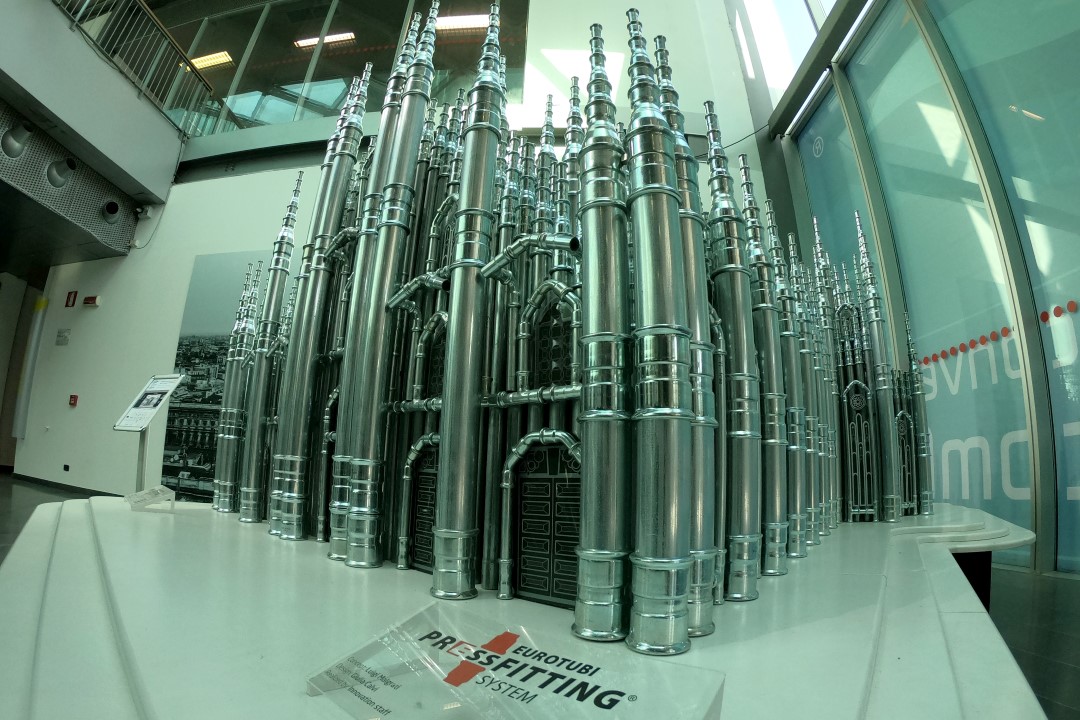 The search for a suitable location

After the Milan trade fair in 2018, we immediately considered that we needed to find an institutional location that would be a suitable home for our Duomo. In the meantime, our sculpture was loaned to some of our commercial partners who used it for their institutional and marketing events.

Due to the pandemic, it was quite difficult to find a location with a certain prestige and suitable interior space to host our Duomo.

Arrival at the Milan Fairgrounds

The ideal occasion presented itself in summer 2021 when the Management of the Milan Fairgrounds began to be interested in permanently hosting our Duomo in their main location at the Milan Rho Fairgrounds. 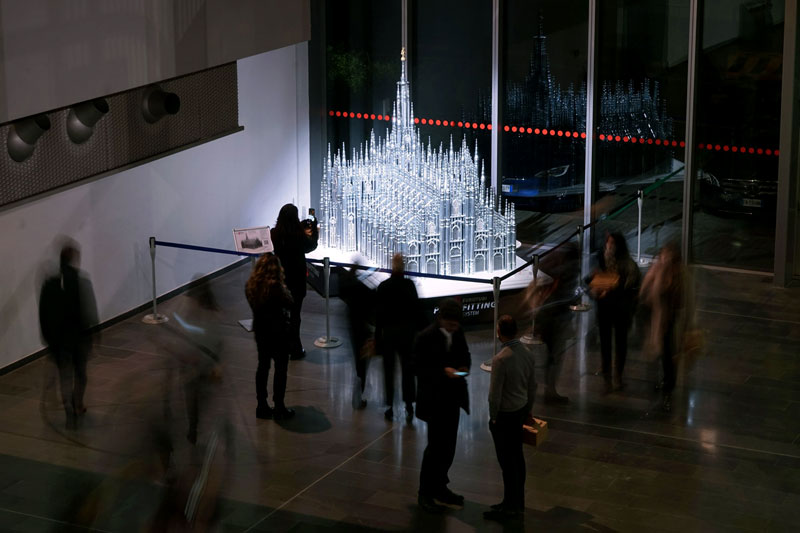 After a series of pleasant negotiations, the Eurotubi Pressfitting Duomo finally found its ideal prestigious position at the entry to the fairground service centre, a highly visible position both from inside and outside toward the enclosed fair hall.

And that’s not all! The work of art made out of Eurotubi pressfittings received its due inauguration during the Christmas Festival organised by the Milan Fairgrounds. The evening was attended by Fairgrounds management, more than two hundred of their employees, some show business personalities, Eurotubi Europa management, and some of the employees who were responsible for creating the Duomo. 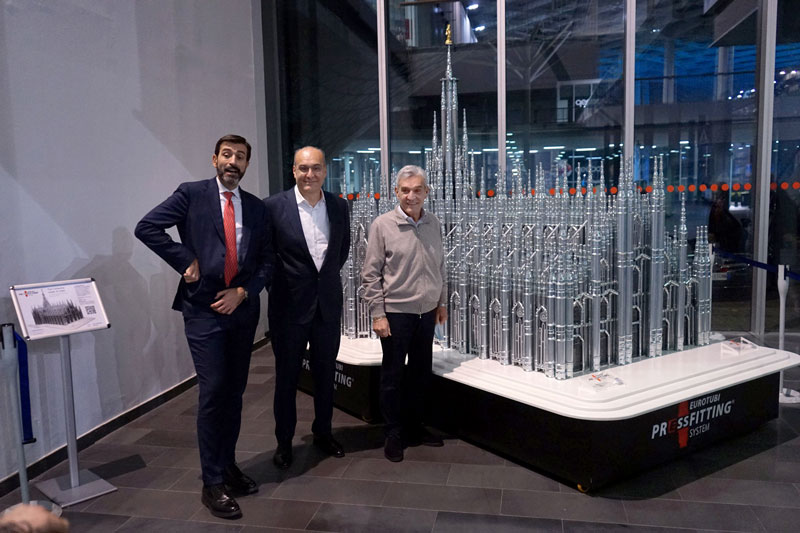 Having the Duomo made with our fittings permanently displayed in a very central location in the Milan Fairgrounds halls was a very important and exciting milestone for us at Eurotubi. 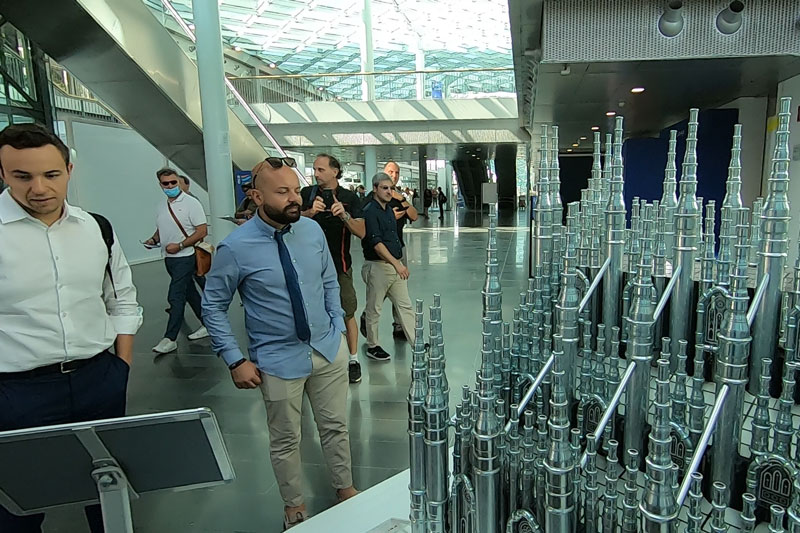 These days in particular, during the MCE 2022 international plumbing and heating sector trade fair, the knowledge that most visitors admired our fittings fills us with additional pride. 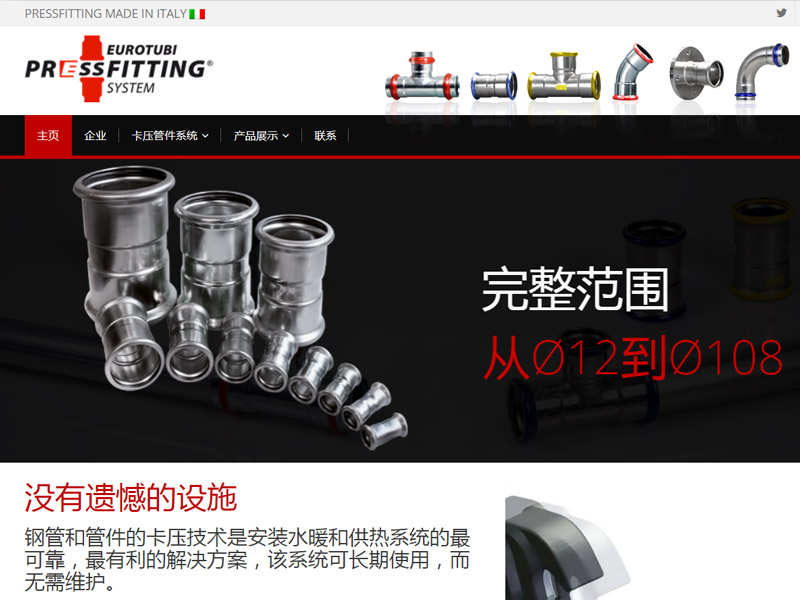 The quality of Eurotubi pressfitting is increasingly appreciated all over the world. In order to provide our business partners in... read more

The most important italian trade fair in the plumbing and heating sector scheduled for March will instead be held from... read more 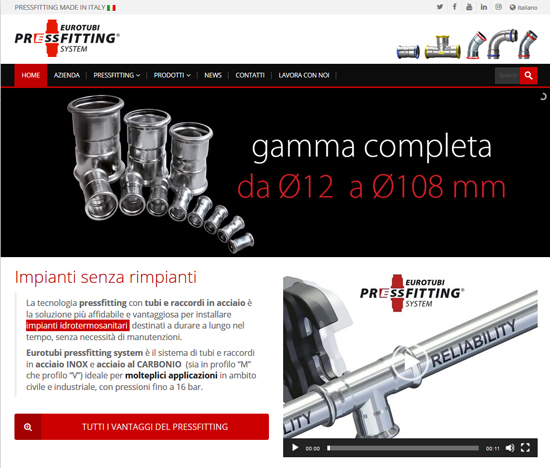 A new year, a new website: the pressfitting.it web portal, specifically dedicated to the Eurotubi Pressfitting System and news from... read more 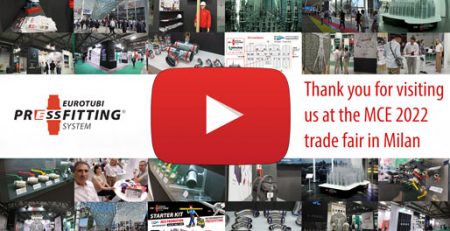 Excellent edition of the Mostra Convegno Expocomfort Fair for Eurotubi Europa, in addition to the great success of the public... read more 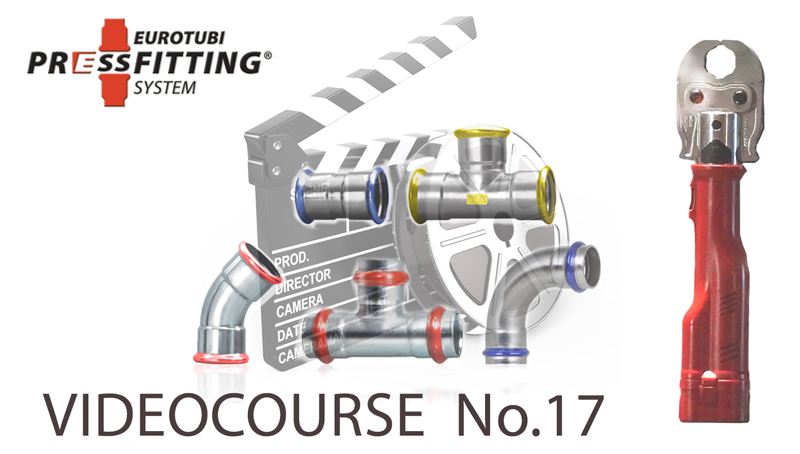 We know very well how the plumbing systems made with the pressfittings are very quick to assemble. To insert accessories... read more

Milan: MCE2020, the plumbing and heating industry trade fair, has been postponed to September

The plumbing and heating industry trade fair, MCE 2020 Mostra Convegno Expocomfort which should have taken place in Milan from... read more 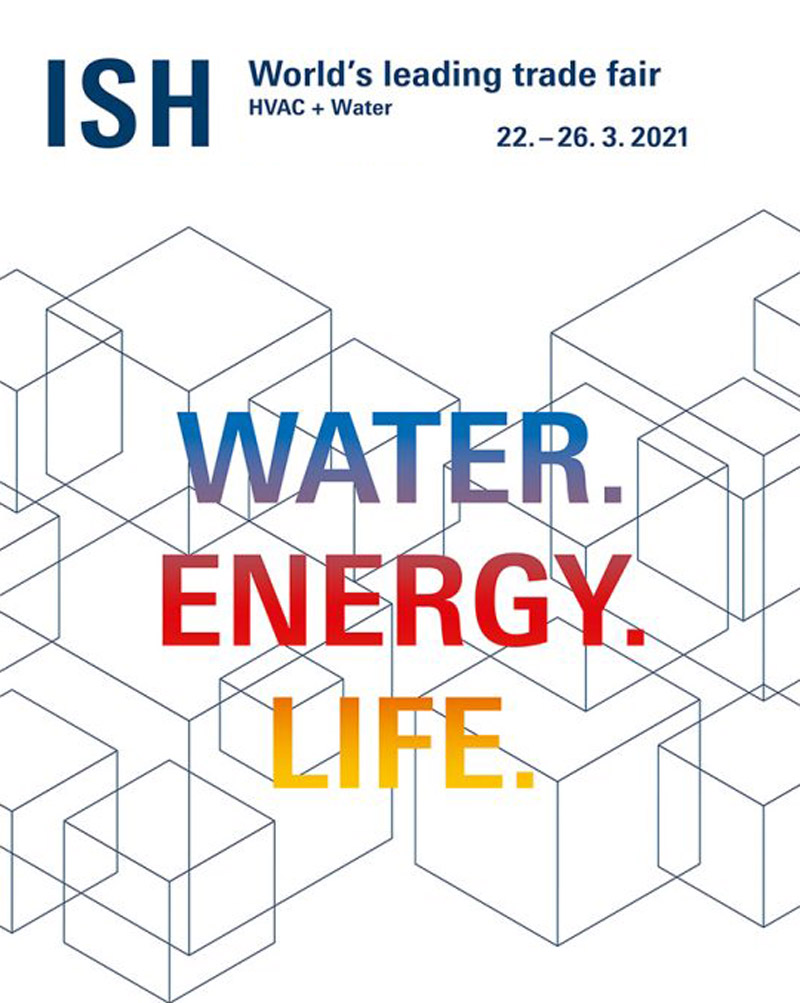 The news that the entire international plumbing and heating sector has been fearing for weeks has finally arrived. The ISH... read more 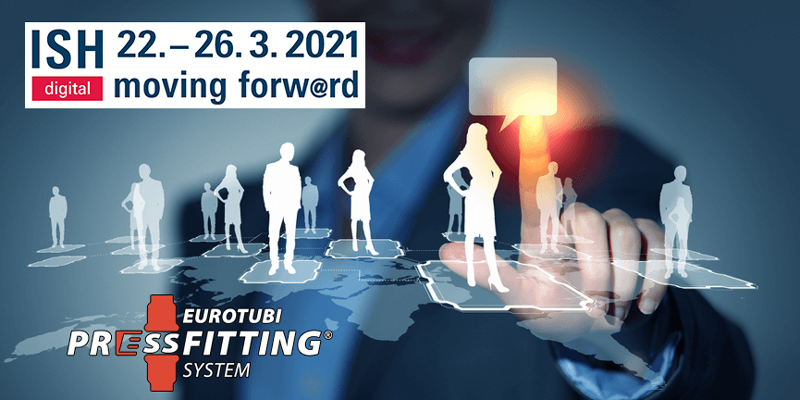 Eurotubi Pressfitting and the ISH 2021 trade fair: this year’s edition will be completely digital

Many trade fairs were cancelled in 2020; this year the professional events have partly begun again, but often without in-person... read more 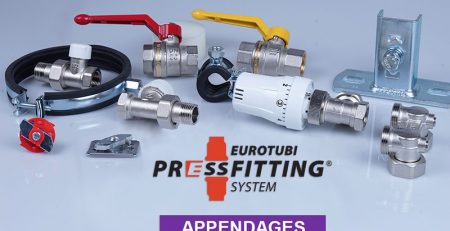 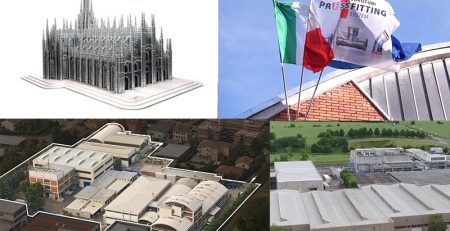 Thirty-second in the ranking of two hundred Italian companies that are Export Champions, this was Eurotubi Europa’s excellent result in... read more

2022 MCE Trade Fair Special: all the signs of a hoped-for return to normality